This week I have two sounds that I recorded with my Sennheiser MKH-8040ST microphone rig. Both sounds are from North Idaho wildlife and are chance encounters with some of earths’ creatures.

The first sound is from a session back in July from the pond on the mountain behind the ranch. I was recording the wind blowing through some cattails (Typha, Bulrush) on the edge of the pond. I had been there recording for a few minutes when a frog started croaking from across the pond. During his display of amazing vocal talent a gun was fired off in the distance and all sorts of pond insects were flying around the microphone. The cattails had a soft rustling leafy sound that was beautiful. I really enjoy recording big, busy sounds but it’s the quiet sounds that really intrigue me and seem to soften my busy day of audio activities that rule my life at times

Frog Cattails And Squirrel 8-26-11 by therecordist 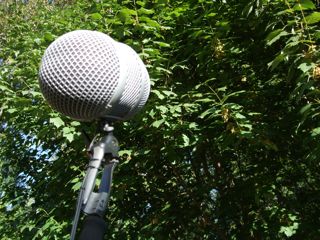 The second sound is from a recent encounter with a squirrel. I was trying to record a very loud croaking tree frog on my deck but was interrupted by a small squirrel chomping on some maple tree seeds about 10 meters away from where the mic was set up.

This is the first time I have heard them rustling around in the maple trees. They are usually way up high in the tall fir trees breaking loose the pine cones so they can gather them up and store for the harsh winter. We did had a strange winter and spring this year and after checking out the top of the trees there are not that many pine cones available for them to eat.

I moved the microphone under the maple tree about 2 meters away form the munching squirrel. He took notice, started to get amped up and then hid in the leaves. Soon after he started to chirp like I pissed him off by disturbing his dinner. I usually find the chirping very annoying especially when I’m trying to record other sounds on my ranch but this time I was OK with it. He eventually moved away and into the thick forest. 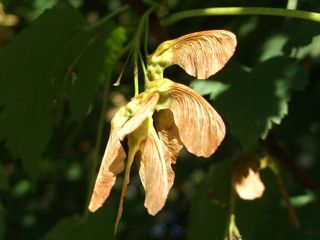 Notice before the squirrel starts to freak out and you will hear a Robin fly by fairly close over the microphone and then make his noise off in the distance. The recording started out clean but then a car passes on my road far behind the mic.