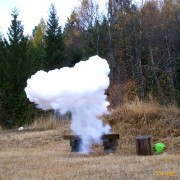 Two years ago I asked myself the question “How can I record the sound of explosions without breaking the bank” After months of research including many hours of watching You Tube videos I asked my local gun shop if they would be able to help me. “Yes we can” was the enthusiastic answer. So, a little over a year ago during the first M-60 machine gun recording session I was able to finally record what is known as “Tannerite”. For those who do not know, Tannerite is a binary exploding target that contains two elements that are sold separated and when mixed together and shot with a high powdered rifle makes quite a loud noise. These sessions came out great even though we got rained out later in the day and had to scramble to get the equipment under cover.

Since I do not have a high powered rifle, shooting these targets would have to be done with my friend Richard who co-owns the gun shop and is a very good shot. This is all well and good but I wanted to be able to record some explosions on my ranch anytime I wanted. Now there is a new brand called “White Lightning”. White Lightning includes smaller binary exploding targets that can be shot with a .22 caliber rifle. I have one of those so this should be easy right? Well, not so fast. The targets are much smaller and for a amateur shooter like myself much harder to hit dead center. The target has to be hit in the center for the best effect. There is also a new target called “Goliath” that I tested and it sounded great. Goliath can be shot with a .22 or larger gun for more flexibility. 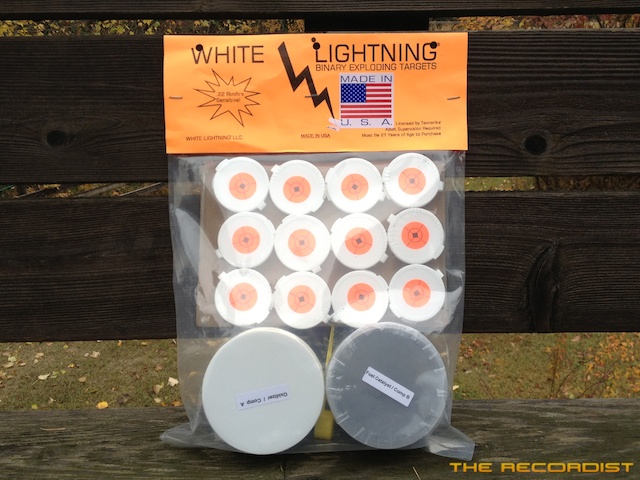 Please keep in mind that this stuff is restricted and/or banned in some states but here in Idaho it is not. A binary exploding target can be legally purchased for sporting purposes, and used by responsible persons who are 21 years of age or older; provided they can legally possess a firearm. Without getting into to many details and creating liability concerns for myself I will cut to the chase and describe what I do before and after recording the sound of the targets exploding. 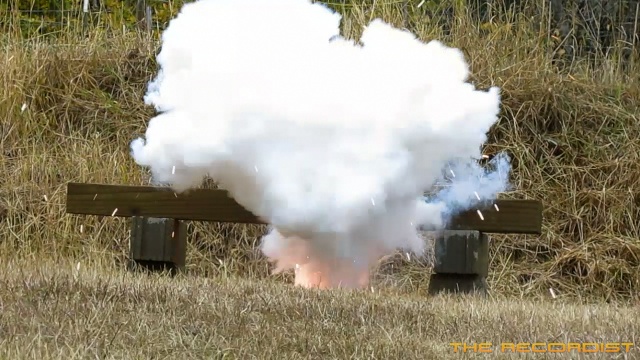 For this blog post I set up a 6×6 wood beam 50 meters from where I was shooting from to place the targets on in a open location out in the front yard. This is not your typical front yard, it is 3 acres of field and I just mowed the tall grass so it was easy to get around. It had been raining here for the last month and during the session it could rain at any given moment so I only used my MKH8040ST and my 2 other MKH8040 microphones set in a wider XY pattern. If it started to rain I could quickly grab the gear and dash into the garage for cover.

One thing to remember about these smaller White Lightning targets, they are very loud. I tend to not use pads on the microphones but this time I did and it was well worth it. I recorded a few nice clean explosion sounds that had not kicked the 2 SD702 recorders’ limiters in.

I did tell you I was not that great of a shot correct? Well this day was no exception, I sucked. I went through 30 rounds of ammo for just 5 explosions. I think the gun scope was off or something because I did not think I was this bad. They must be hit dead center to initiate correctly.

Upon listening back to the recordings I remembered how big they sounded live even though I was wearing hearing protection. The recording sounded great but they lacked that “thump your body” feeling you get when actually there recording. Since I had some decent source I figured I could “beef” them up with some pitching and processing.

The first thing I do is edit out the gunshot that happens milliseconds before the explosion transient. Sometimes I will process with the shot still there if it sounds good. Most of the time the shot does not sound very good because it is off axis or behind the microphone so most of the time it makes sense to remove it from the file. I do this with the raw files in Pro Tools and create what I call a “COMP” Since my recordings can have minutes of blank space between the shots I want them all neatly organized and ready to go for the VST chain. The idea of a COMP version is all the sounds lined up in a row and all if any multiple microphone tracks remain in sync. I then consolidate the raw files in Pro Tools and add them back into my Soundminer database. (Someday I can elaborate on this process if needed).

Below are the screenshots of my Soundminer VST effects chain. I love the VST capabilities in Soundminer because it allows me to stack tons of sound shaping plug ins together while playing with the pitch of a file. I realize this is not a new concept but I get excited every time I use it. I pitched the sounds down to 47% or 52% depending on the sound and then transfered it to Pro Tools for final sequencing. 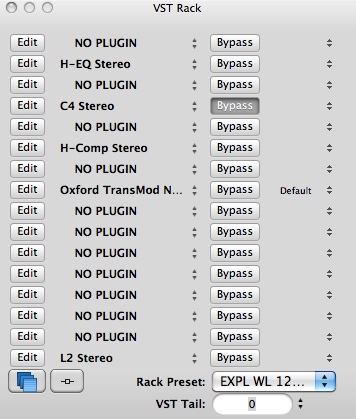 This is the simple VST chain I used 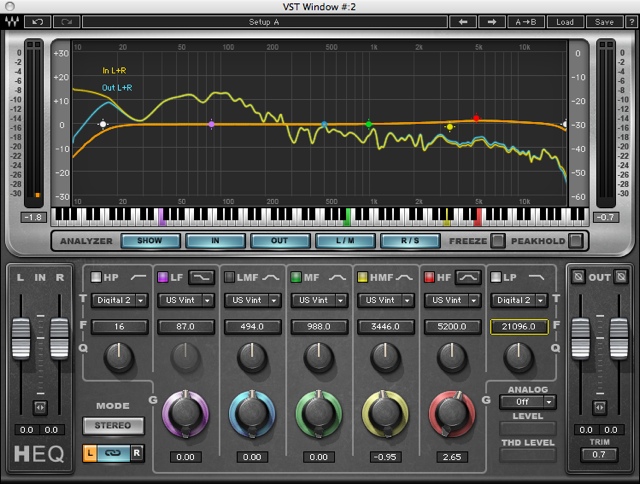 The EQ. Added some top end and a slight DC roll off. MKH8040 mics have LOTS of low end 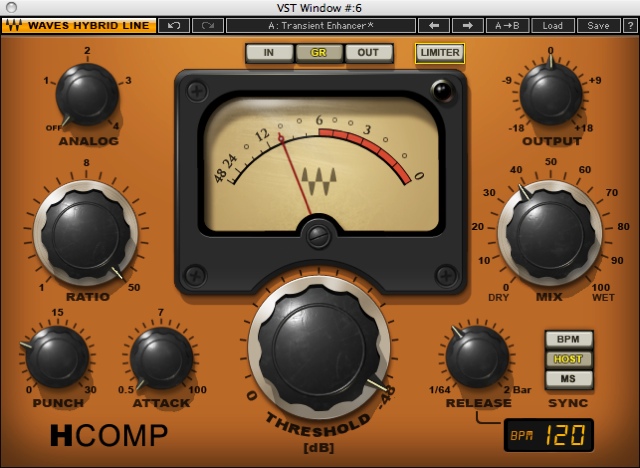 The transient enhancer on the compressor. Full on, all the way settings. I do not use the "Analog" knob as it adds some noise. 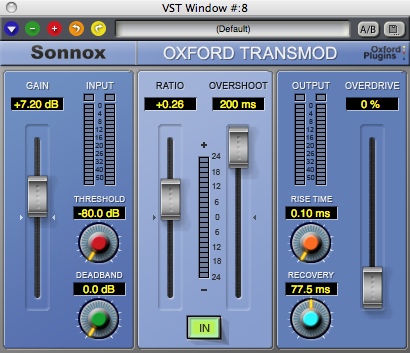 For even more attack on the transient and to boost the level, this is one of my go to plugs 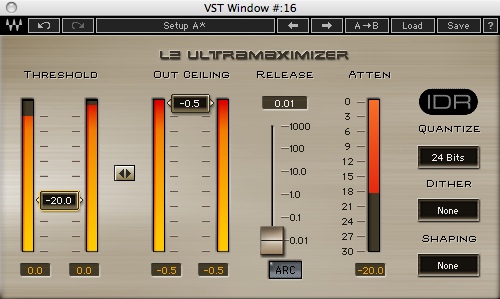 The final blow! Lots of loud. Careful with this one it can destroy the sound. 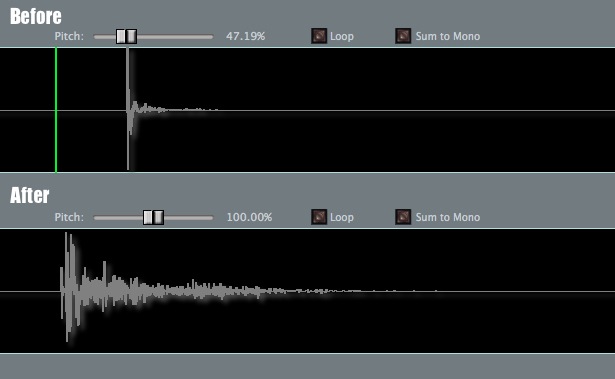 Before and after waveforms in Soundminer 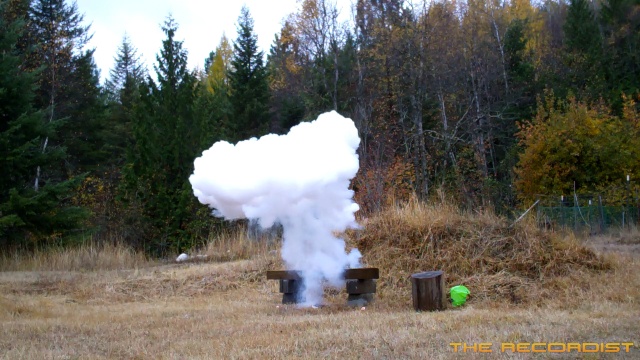 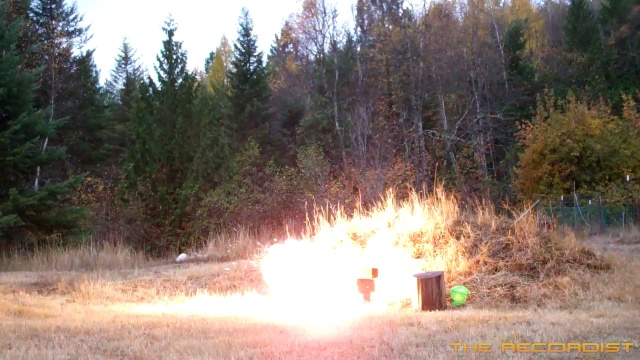 Crazy Sound Of The Year 2012
Scroll to top