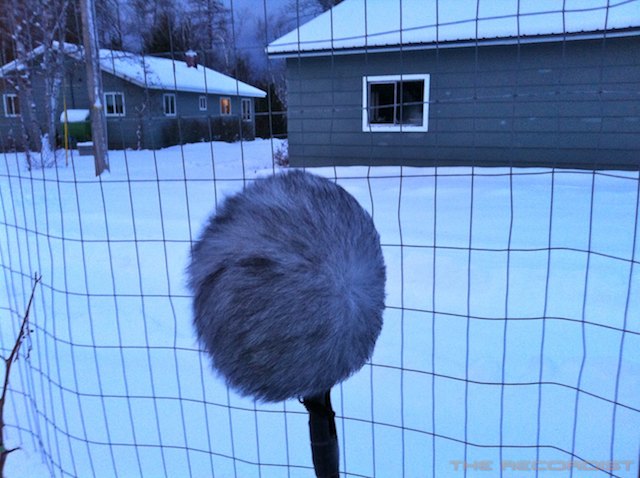 The third week of January 2012 proved to be a goldmine for snow sound effects here on the ranch. The typical North Idaho winter finally arrived bringing with it lots of snow, wind and freezing temperatures.

The week started with a bunch of snow falling along with some very cold temperatures. As the winter storm progressed and the weather systems above were battling it out for supremacy, the wind came. Not a soft blowing winter wind but some strong sustained blizzard like winds with gusts up to 65 MPH.

I shot some video from my front door of the cold dry snow blowing off the trees and around the yard and then decided it was time to veture outside to the garden area and set the MKH-8040ST up near the fence. I can usually get some good whistling through the fence and the power lines above and this time was no exception. Some really strong gusts swept by and really knocked the mic around a bit. I was in such a rush to get set up that I left the Sound Devices 702 low cut filter set to off. I was concerned that the gusts would stop soon so I just set my levels and rolled.

During a break in the heavy gusts I did manage to get the low cut filter on and recorded a little more. By this time the storm had settled down and I was freezing. It was 15 degrees Fahrenheit with the wind chill at approximately -5 degrees below zero Fahrenheit. I did not want to stay outside much longer as I was concerned about the MKH-8040ST freezing up.

Later in the week after the snow had piled up on the roof I patiently waited to get the sound of the snow sliding off the roof and falling onto my deck. When it’s very cold the snow stays and accumulates on my metal roof. As soon as it warms up a little and the sun comes out it can slide at any second. The trick is to guess when. The roof edges start to drip and after a few hours I can hear it creaking and clunking from inside the house. At that point I have a few minutes before it all comes down. I was ready this time. It all came down. 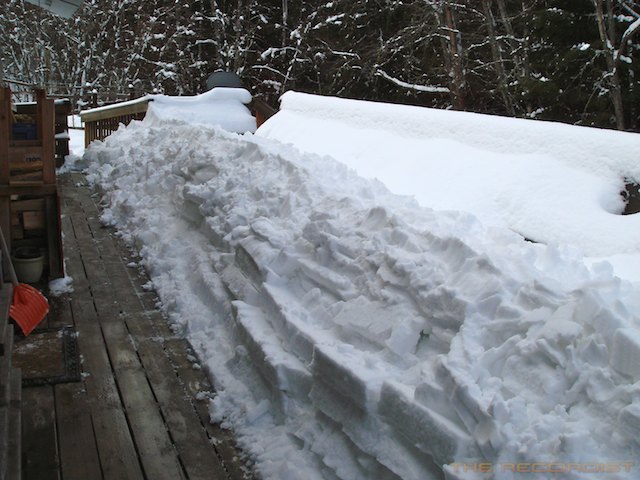 I also was able to record the sound of snow pack hitting the ground as I shoveled the snow off my deck. I got some very nice thumps and debris spray close up while at the same time getting some much need exercise.

I also pulled branches on the trees to make the snow fall off. This was tricky because you don’t know from which place on the tree the snow will fall from. All hell can break loose and you can get covered in snow and large trees do not move that easy. I have pulled to hard and landed on my ass way too many times for my comfort.

By now we have seen four storms come in during the week and the last one was after some freezing rain. Overnight the rain had turned to snow and piled up on the trees. There was very little wind and the next morning I headed out to the north east corner of my ranch to a grove of fir trees and heard some very nice falling snow. The snow was falling on it’s own and with a little help from a light breeze. As the morning warmed up the snow was falling continuously.

I recorded from many locations looking for the best angle and I had some luck. The falling snow was unpredictable and I was just winging it most of the time. I tried not to get too close under the trees as I never knew where the snow was going to fall off. I recorded some close falling sounds but the best part was hearing the distant ones from high up the tall trees making their way to the ground.

I was lucky that the morning was quiet and there was a soft wind. A stronger wind would have masked the sound of the crystals tumbling over each other. 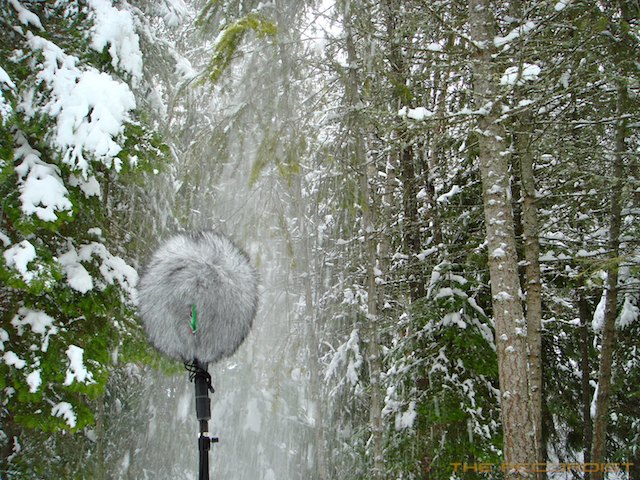 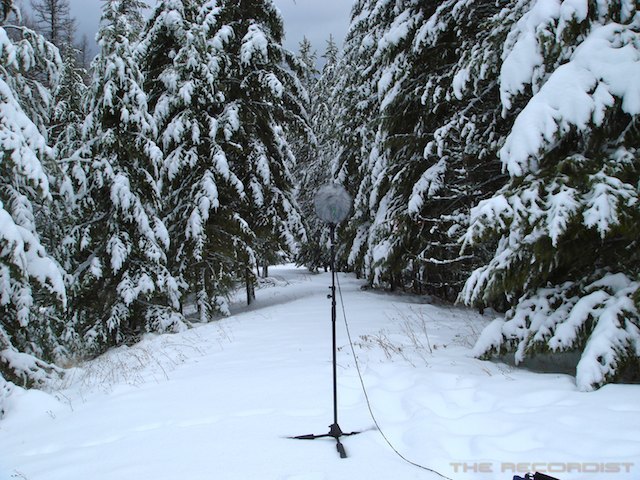 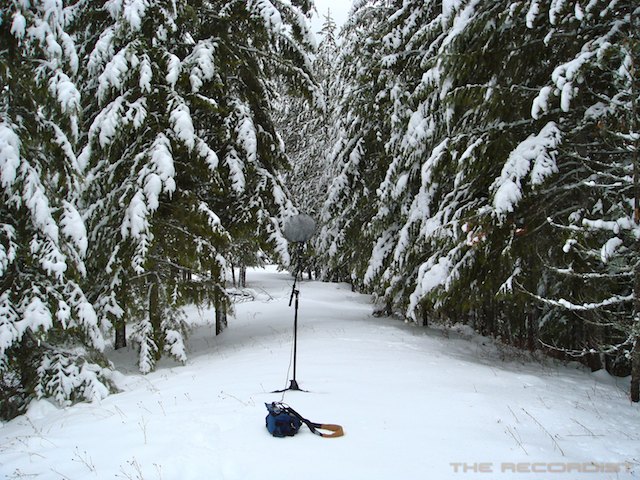 1. Observe and learn the best times to record the different kinds of snow. Wet snow occurs during a warm up or after the sun has come out and spread its heat on everything. You should best get this at the start of the warm up as the dripping that can occur can ruin your recordings depending on where you are located. Dry snow is best recorded when it’s really cold in the morning or at night when there is less activity going on in the world, you get cleaner recordings.

2. Wear non-synthetic clothing. I do not wear any “plastic” winter clothing as it can make noise when you move around or if any snow hits your body. Don’t laugh but I have a pair of pull on leather UGG boots I wear for recording snow. They have no buckles, zippers or laces to make noise that can destroy any chance of a good clean take.

3. If you are recording soft, low level snow sounds it’s best to stand away from the microphones. Sometimes this is not possible so make sure you have a comfortable spot to stand and don’t move. Breathe lightly and make sure your feet are planted securely as the longer you stand the more chance of slipping or adjusting yourself which can get in the recording.

4. I really don’t like to record everything with a Windjammer over the microphone but with snow it is almost a requirement. I’ve had lots and lots of snow fall on the microphone and this lessens any chance of the “hitting the microphone” plastic click sound.

5. When recording snow blizzard wind turn that low cut filter on. I tend to use 80Hz but sometimes 160Hz works depending on the rumble from the wind.

6. This probably goes without saying but if you plan on being outside in the bitter cold for any longer than 10 minutes, dress appropriately and keep yourself warm… especially your hands. Be safe and pack your flask.

Here is what can happen when they don’t plow the road and you don’t have four wheel drive:

One of the things I’ve always wanted to record was the sound of the snow falling off the towering Fir trees here in North Idaho. For the last 15 years I’ve tried many times but the conditions were always terrible. There was usually too much wind or the trees were wet and dripping or it was just plain impossible to get clean recordings. Over this past Thanksgiving weekend the conditions were perfect. Over a 3 day period 18 inches of snow had fallen, it was really cold and there was no wind to speak off. Now all I had to do was figure a way to get the snow to fall off the trees.
END_OF_DOCUMENT_TOKEN_TO_BE_REPLACED

For the past few days it has been incredibly cold for this time of year in North Idaho. Along with this cold came some very strong winds and blowing snow from Canada. With temperatures at 1 degree above zero and a wind chill of -25 degrees below zero, recording was going to be a challenge. I had a chance to record some of this wind and snow over a two day period.
END_OF_DOCUMENT_TOKEN_TO_BE_REPLACED

Snow is another of the sound sources I’ve used quite a bit in the video games I’ve worked on such as Dungeon Siege, Neverwinter Nights and Demigod.

North Idaho gets its share of snow. Living here in the winter is fairly tough when we get lots and lots of snow but it also creates an wonderful opportunity to record some great snow sounds. We get all kinds of snow: slushy, icy, brittle, hard, soft, heavy, light, you name it. Over the last 5 years or so I’ve collected quite a bit of snow recordings at 24bit 96K.
END_OF_DOCUMENT_TOKEN_TO_BE_REPLACED

North Idaho gets its share of snow. Living here in the winter is fairly tough when we get lots and lots of snow but it also creates an wonderful opportunity to record some great snow sounds. We get all kinds of snow: slushy, icy, brittle, hard, soft, heavy, light, you name it. Over the last 5 years or so I’ve collected quite a bit of snow recordings at 24bit 96K. I’ve been recording snow since the DAT days and am totally amazed by the quality HD audio provides when recording snow.
END_OF_DOCUMENT_TOKEN_TO_BE_REPLACED