I recently bumped into a friend of mine from the area and the first thing he said to me was “I was just thinking about you the other day, I have these frogs in my pond that make one hell of a racket at night. You should come record them” By the way, this happens to me quite a bit when I meet friends at social events or just hang out. They always let me know if they have heard something interesting that I might want to record, lucky me!

This friend has a large pond on his property that is almost perfectly round. He told me it is a very old sealed up ice vent. It’s very deep and at one time was frozen solid down in the center shaft that at one time extended many miles into the earth.

I showed up at the pond at dusk with my two Sync locked SD-702 recorders and my MKH8040ST microphone rigs, one XY and the other ORTF. I set them up on the shoreline about 3 meters from the water. I placed them 30 meters apart basically one on each side of the pond. The microphone rigs were not facing each other from across the pond, they were side by side. After listening to the general ambience of the pond before the frogs started making noise, I thought this was the best approach. 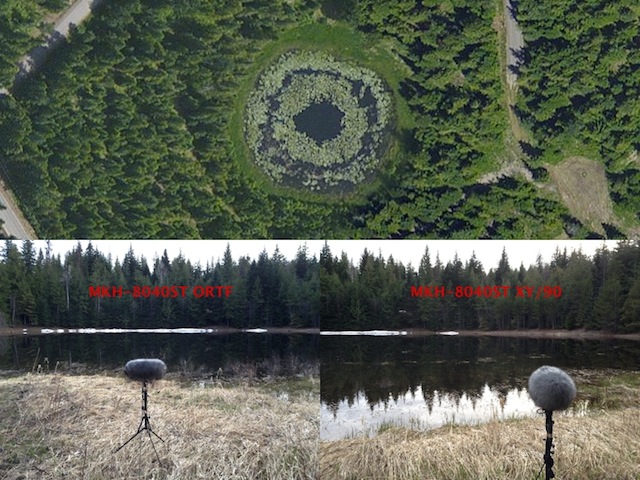 The ice vent pond and the microphones.

After we had everything hooked up and tested we walked back up the steep hill to the house and waited. About 40 minutes later they started. This pond is surrounded by tall firs trees most of the way around and it is located down in this low area. This was perfect because even though we were a mile away from a state highway and the railroad tracks you could hear the background noise from traffic quite a bit. Down at the pond was more isolated but I did notice some traffic sound at times, it was more like a steady tire tone from the pavement and the occasional car pass on the county road nearby.

When these frogs start making whoopee it all begins with one frog. It starts and slowly the other ones begin their mating call or whatever you want to call it. Before you know it there are hundreds of frogs involved and then all of a sudden they will stop. After a while they will begin again and the darker it gets outside the louder they get. I could not stay very late as I began to smell a skunk when I went to check on the microphones so I packed it in much earlier that I expected. It was very dark by this time so I was a little spooked. Skunks… not a good animal to be around. I will go back soon on a quieter evening and stay later to get the full on tribal whoopee chanting.

The demos below have the separated stereo tracks from the Sync locked recorders. The ORTF rig was slightly closer to the main frog action and recorded more detail of the individual frogs croaking and has a much wider stereo image. I ran these files though a EQ with a brick wall low cut filter at 180Hz to get rid of the rumble and then I was able to zero in on the traffic noise with RX2 and get rid of most of it without affecting the integrity of the source.

I included a screen grab of the two files in RX2 and you can really notice how different the waveforms look even though they were recording basically the the same thing. 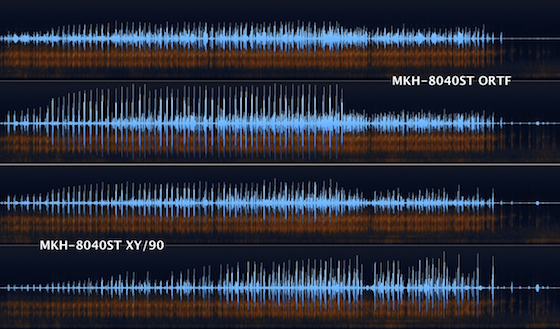 The waveform display from RX2. Click to see larger

Here’s a tip for recording nature sounds at night in North Idaho: Listen carefully, set the gear up, hope for the best. And… if you smell a skunk, grab the gear and RUN!