After your purchase is complete you may access your “My Account” link at the top of the page to view your order and download your products.

Check your email for the invoice after purchase.

For best results please download your product files from your “My Account” page. The email confirmation link can be unstable. All sales are final.

Single user license pricing is shown. If you require a license covering multiple users, CONTACT US for available options. Or, Adjust the Quantity before clicking “Add to cart” to the number of users you need.

The Hawk HD Professional Sound Effects Library is a multi-channel collection of sounds from a Sikorsky UH-60A helicopter that has been converted for civilian use. This one of a kind collection features multiple ground and flight “Track and Balance” operations recorded in a exceptionally quiet environment. Cockpit control systems (switches, levers, dials, pedals, sticks) and doors are also included. Recorded on nine separate occasions.

Please adjust the number of users you need and click Add to cart. A multi-user discount is automatically applied.

Presenting: The Hawk. One of the helicopters I’ve enjoyed recording the most is the Sikorsky UH-60A Blackhawk Helicopter. The UH-60A is a four-bladed, twin-engine, medium-lift utility helicopter manufactured by Sikorsky Aircraft. The UH-60A entered service with the U.S. Army in 1979, to replace the Bell UH-1 Iroquois as the Army’s tactical transport helicopter. This machine is a reconditioned rotorcraft from military surplus and is the real deal. It has been updated and modified to be used as a heavy lift helicopter but it still has the traditional sound of the original military hardware.

I was granted exclusive access to the very expensive helicopter to record multiple “Track and Balance” tests at full throttle on the ground and in flight. I used a Schoeps MK4-MK8 M/S for the medium distant perspectives and was hand held so I could be mobile. I set a Sennheiser MKH-8040ST XY microphone close up and then medium close during the test starts and power down sequences. I set up my AT-835ST far away in the grass field next to the runway. I also set a Sony PCM D-100 and MKH-8040ST ORTF inside the Blackhawk for the interior perspectives. On other occasions I used a Sony PCM D1 for some distant perspectives and set the PCM D-100 outside the helicopter at a medium distance on the ground.

The helicopter was recorded on many different occasions and in a few locations. At times the Hawk was in a wide open field and other times it was in close proximity to buildings. There is very broad selection of perspectives and performances you can draw upon for sound design. I used the MKH-8040ST XY microphone on a boom pole for some of the pass bys and start ups and other times I used the Schoeps MK4-MK8 M/S microphone set.

One time I recorded the Hawk it was making a quick trip to the portable refueling station just across the street. I set up the MKH-8040ST XY and ORTF rigs at the take off location and I waited with the Schoeps M/S rig across the street at the airfield and recorded it flying in and setting down. While it was refueling and having a minor glitch repaired I drove back to get the MKH-8040ST microphone rigs and then placed them at the refueling area for the Hawk leaving. There was also a Sony PCM D-100 lurking around out there in the distance.

All went well except for a initial “microphone down” take during one of the first recording sessions that rendered a take completely useless. Yes, the Go Pro went over once from the rear rotor wind blast as the Hawk was making a ground turn. Thankfully the crew loaned me some sandbags to keep the microphones in place for the later takes.

Update: April 27, 2017: Over 5GB of new exterior and interior sounds! Using a Soundfield ST-450 MKII, interior B-Format Ambisonic sounds from ground runs and a 30 minute flight are featured in their entirety. I was also able to crouch under the nose of the UH-60 as it was performing a ground test and recorded the blades spinning overhead… Yes, that was intense! I also placed a microphone in a open window for a fantastic mix of interior and exterior. Close up engine starts and stops were also captured. Stereo XY versions from the Soundfield ST-450 MKII are included.

One of the helicopters I’ve enjoyed recording the most has been the Sikorsky UH-60A Blackhawk Helicopter. This machine is a reconditioned unit from the military and is the real deal. It has been updated and modified to be used as a heavy lift helicopter but it still has the traditional sound of the original military hardware. Here are some sights and sounds from this amazing sound effects recording adventure. 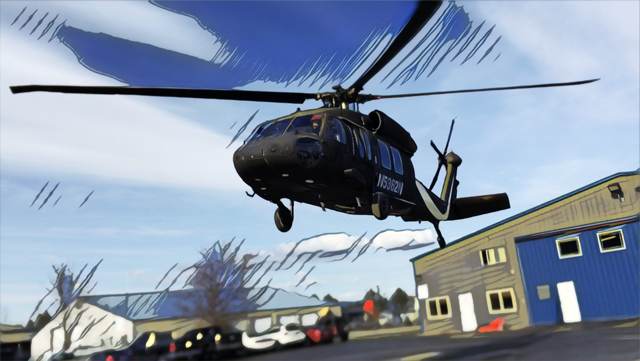 IMPORTANT:
Please Note: The sound list & EULA for each collection may not be included in the actual download. Please go to a product page and click on “Tracklist” to view or download the appropriate sound list in PDF or MS Excel (XLS) format. The current PDF of the EULA is available here for download.

Purchases made at this website are DIGITAL DOWNLOAD ONLY. No physical shipments of DVDs, CDs or Hard Drive or any other media now known or may be know in the future will be delivered.

Because the TheRecordist.com Web site offers its users the opportunity to audition a sound effects collection before a purchase is made, all transactions conducted at TheRecordist.com are considered final sales. Please make your license purchasing decisions carefully, because once you have obtained download access to any of our digital sound effects, we are unable to cancel your license or issue a refund for your purchase.

Before purchasing, please take the time to look at our end user license agreement. The sounds are royalty free and licensed to you, which means there are some restrictions, so please read it carefully. Sales through this site are single-user licenses, if you are working at a media or video game production facility and are interested in a multi-user site license, please contact The Recordist for more information and rates.

COPYRIGHT NOTICE:
This work is made and sold under license. By accepting this work, you agree to the following terms and conditions. Your use of this work is limited and restricted solely for the purpose of synchronizing recordings there from in timed relation with films, training or marketing presentations, radio and television presentations or commercials, and any other multimedia, audiovisual or computer generated displays, programs or presentations. Neither you nor anyone else may make any copies of any of the recordings on this work, except as may be designated to a single stand alone workstation for the purpose of specific audio and/or visual synchronization at your own facility. Transfer, copying or duplication of the work in whole or in part for any other purpose is expressly prohibited unless specifically authorized in writing by The Recordist. Transfer of one or more sounds to any format allowing network or remote access by two or more end users requires a Multi-user License. Contact The Recordist for details. In the event of a breach of these terms, action may be taken against you directly by Creative Sound Design, LLC., the owner of the copyright.

There are no reviews yet.

Only logged in customers who have purchased this product may leave a review.