You are here: Home1 / Blog2 / Featured Articles3 / The Envolution of Suppressors

Over the past few months I had the honor of beta testing the Oxford Envolution plug-in from Sonnox. I normally don’t plug a plug-in directly but in this case I really want to share my experience using this new envelope shaper on the latest addition to my Suppressed Weapons Sound FX library. Right off the bat I will say WOW! I’ve never experienced such a unique and powerful transient and sustain manipulator on suppressors. I’ve used many including their TransMod plugin and always find new and exciting ways to enhance the sound effects I include in my libraries with envelope shaping.

Oxford Envolution from Sonnox is a frequency-dependent envelope shaper with separate transient and sustain sections to radically re-shape the envelope of your instruments or audio.

Envolution provides comprehensive control over the transient and sustain portions of an audio signal. Unlike most alternatives, attack, hold and release can be independently adjusted, enabling a wide variety of effects.

In addition to this, the effect of the transient and sustain processing can optionally be applied in a flexible frequency dependent manner. This is achieved without splitting the signal into separate bands so, unlike multi-band processors, the plug-in may be freely used anywhere in a mix without creating phase-cancellation problems.

The Transient section is an evolution of the Oxford TransMod, providing enhanced flexibility and more predictable gain behaviour, while the Sustain section is completely new.

The Audio File
The audio demo in this blog post showcases two suppressed guns from my Suppressed Weapons HD Professional Sound Effects Library. First is a 40 caliber handgun and second is a 300 Blackout Rifle recorded in a wide open field. The raw source and then the processed version of each gun is showcased each with two stereo microphone perspectives. The last four shots in the demo also include some of the mono microphones placed very close in on the guns mixed with the medium close stereo microphones. 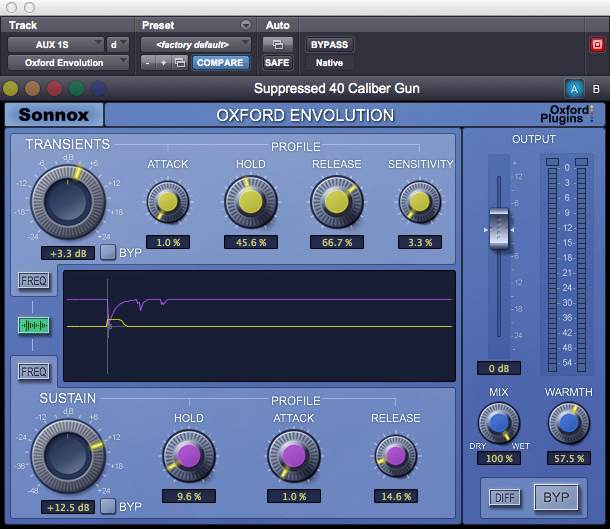 Suppressed 40 Caliber Handgun
With the handgun setting shown above I came up with slightly enhances the transient of the shot with the initial attack being extended and released slowly. This helped make the shot of the gun sharp but without a pronounced “gated snare sound” effect. I also amped up the sustain of the shot with a quick release to elongate the medium long echo the shot produced. It also beefed up the low-end of the sound without any EQ. 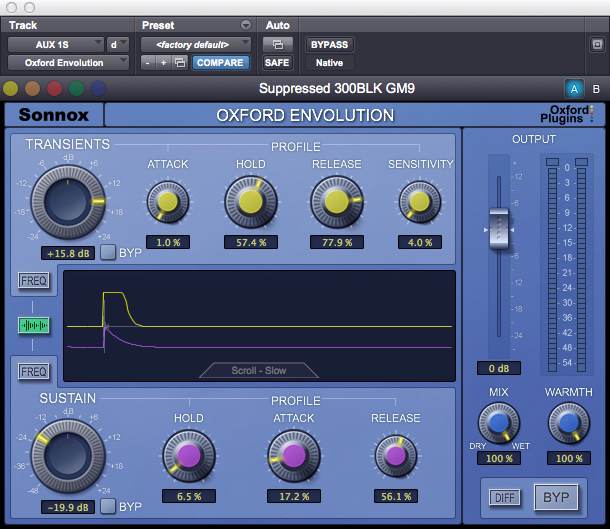 Suppressed 300 Blackout Rifle
On the 300 Blackout rifle I went in a different direction and pulled way back on the sustain portion of the sound and hit the transient really hard (almost 16dB). The Envolution controls allow me to hold the transient quite a bit along with a nice long transient release time for a smooth fade. 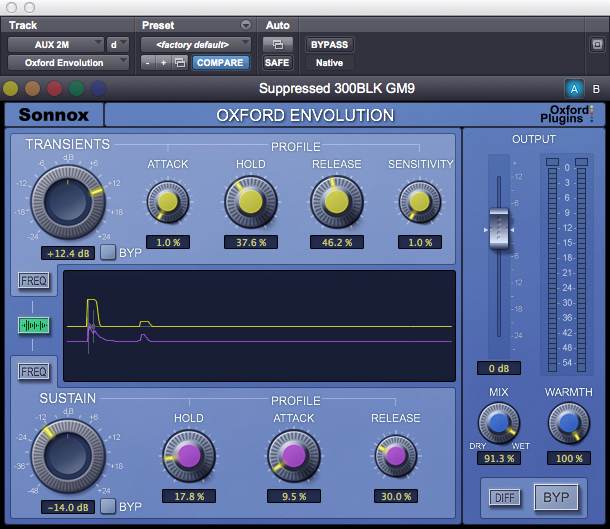 Suppressed 300 Blackout Rifle Mono
This screen grab shows the settings I used for the mono channels for the 300 Blackout rifle. I jacked up the initial transient quite a bit and pulled back on the sustain portion of the sound. I was able to isolate the “mech” sound produced by the slide of the gun and have the echo barely noticeable. The end of the audio demo has the mono channel sounds mixed in with the stereo tracks.

Two things I love about this plug-in:

Warmth and Level Control
The Transient process can produce significantly larger peak levels when positive Level settings are used. The Warmth process is included to allow a degree of relief from premature clipping if high modulation levels are required, by providing a method for the harmonic content of peak information above digital max to be included in the final output signal from the plug-in.

When set to maximum (100%) the Warmth process will allow peak input signals up to +6dBFS to be included without the sound of hard clipping, while preventing output signal overloads greater than 0 dBFS. Warmth processing will also change the harmonic content of the programme to provide warmth and richness.

Spectral Shaping
I will get into this in more detail at a later date, it’s really cool!

For more information on Envolution head on over the Sonnox and check it out
Special thanks to Giles Farley and Tim Lloyd at Sonnox for allowing me to beat on their latest plug-in.

Suppressed Weapons Stage 2 is now available! Stage Two includes suppressors introduced to the market in the last year along with the Gemtech Blackside 40 which was also used in Stage 1. These amazing “cans” as the gun folk call them, include the latest sound suppression technologies and advanced manufacturing processes known to man.

Recording the sounds for Stage Two was really an amazing experience. I performed many of the shots myself and also had a experienced armorer handle some of the load. Suppressores used were a Gemtech GM-9 and GM-45.The GM-9 was also used with subsonic ammunition on my 300 Blackout rifle. The latest addition also includes lots of “mech” sounds produced while using subsonic ammo. Distant “beefy” muzzle shots and bullet pass by tracks are also in here.

Suppressed Gun In The Mountains