You are here: Home / Blog / Photos 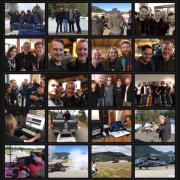 The recording sessions for Shotguns HD Pro are complete. During month of March 2016 and into April I recorded in many locations in and around North Idaho. Most of the time I was doing the shooting by myself and one other time I had a fantastic shooter handling the chore. Here are a few photos from the recording sessions that took place during the last remaining sound effects gathering dates.

I recorded in my yard, at a nice mountain quarry with a spectacular view of the “Lake” as we call it up here and a wide open 400 acre ranch with virtually no echo tail. Having a near “echo free” environment to record a Lavalier microphone attached to a semi-automatic shotgun was fantastic. Also, the sound obtained from the other microphones placed at various distances was interesting indeed. Just the loud, punchy shot transient with a echo tail that came back three seconds later and was 2000 feet away.

On August 7th and 8th, 2015 I was at the local airport and was able to record some airplanes and helicopters. It was a beautiful day and the environment was “background noise” free, perfect for recording sound effects!
END_OF_DOCUMENT_TOKEN_TO_BE_REPLACED

Recording The Lake here in North Idaho on a very windy day.

END_OF_DOCUMENT_TOKEN_TO_BE_REPLACED

Suppressed Weapons Update
Stage 2 recording and post production has been underway all summer and continues into the Fall. So far over 15 location recording sessions have been completed, some small and some large. Many locations were used to provide the sound designer with an abundance of unique spaces. Close and distant microphones were used that can be mixed and matched to produce realistic and not so realistic suppressor sounds. I have a few more recording sessions planned that should round out the collection.
END_OF_DOCUMENT_TOKEN_TO_BE_REPLACED