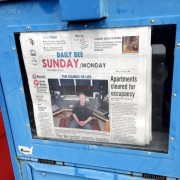 SANDPOINT – Frank Bry hears things. It’s his job, actually. Where most of us might detect a twig breaking underfoot — if we notice it at all – Bry’s ears snap to attention, fully alert to the myriad ways a twig can be broken and how it might sound from dozens of different angles.

For Bry, the crack of ice on a frozen lake is only an overture to the symphony that follows. It might be a deep-bellied echo from the depths below, or a sparkling chorus of bubbles rising up to answer the initial fracture, but he hears every note, registers every subtle aspect of the soundscape.

Anyone who has attended a blockbuster movie or played a multi-million-seller video game in the past 10 years has had their emotions triggered by the sounds he captures for a living. Using his North Idaho home studio as a base, Bry goes out into the field to record the sounds that inject life and believability into what would otherwise be a mere stream of images.

If you found yourself on the edge of your seat during some major motion pictures, thank The Recordist for the effects that helped put you there. Be it fire, rock falls, breaking timbers or thundering rapids, many blockbusters are full of sounds Bry gathered in the wild.

“There’s North Idaho ice and snow all over quite a few movies ” Bry said, adding that he spent February of 2012 standing in the middle of Round Lake to record the frigid effects for many international hits. “When the sun comes up at 5 in the morning, that place starts to make the most incredible sounds.”

Bry was invited to the studios at George Lucas’ Skywalker Ranch to preview what would go on to become the highest-grossing animated film of 2012. Sound designers there had taken his recordings and used them to create a theater-rumbling soundtrack for the calving of entire continents and the Ice Age floods that followed.

“It was amazing — the sounds were huge,” said Bry. “But I still recognized it as the sound of Round Lake.”

Bry moved to North Idaho in 1997, after working as a sound designer for one of Paul Allen’s Internet businesses in Seattle and engineering for bands such as Los Lobos, The Motels and members of Heart. The popularity of digital recording and multi-media made him a hot property for special projects, including CD-ROM recordings for Sting, Peter Gabriel and The Muppets.

“And then I found video games,” he said.

Working for a game developer, Bry helped design sound effects for “Castle Infinity,” which he described as the first online, multi-player game. It wasn’t long before he branched off on his own, providing effects for more than 30 games, including the sounds for “Total Annihilation” and the 5.1 surround-sound mixes for “Guitar Hero: Warriors of Rock.”

In 2008, when the national economy went into a tailspin and the game industry began to wind down, Bry realized that there was a much larger market for his sound effects if he were to sell them outright, as opposed to contracting one game at a time.

He started marketing his effects as bundled packages, organized by themes such as jets, trains and antique warplanes. As technology improved, so, too, did his recording studio and field equipment. Capturing sound in high-definition audio, Bry was keeping an ear out for new sounds as he continued to build his library.

“If a thunderstorm started, I dropped everything and set my mics up,” he said.

The catalog expanded, and soon The Recordist was offering packages for sale with names like “Ultimate Wood” “Ultimate Ice” “Ultimate Splash” and his latest, “Ultimate Dirt.”

“Just dirt — the sounds of dirt,” he explained after being asked what such a collection might contain. “Watch any show where someone falls on the ground and the dirt moves. Or, when there’s an explosion, dirt and debris fall all around. Or it could be a monster’s footsteps or a rock-climbing scene or a mineshaft cave-in.

“My sounds are sweeteners,” he added. “They’re not that exciting on their own, but when you combine them with a scene, they work — they’re indispensable.”

The Recordist now finds a keen audience for every new package he puts together, selling his high-definition files as online downloads through his own website. “It’s a global business — I sell to every country that allows people to get on the Internet.”

One reason Frank Bry has emerged as a global property is because of his ability to put a face and a name behind a formerly faceless commodity. Sound designers, radio production staff and recording engineers in multiple countries don’t really know — or much care — that he’s basically working from home near the shores of Lake Pend Oreille. What they do care about is the quality of his work. And it’s that quality that keeps the sales coming in for Bry. Even while he sleeps.

“People from the major television networks, film studios and game companies tell me, ‘Your stuff just has so much character — how do you do it?’” Bry said. “To me, it’s like writing a hit song. When I hear a sound, I can feel the intent.”

For more history on The Recordist and to hear sound samples, visit online at: www.therecordist.com