I like to stay home…
I really wanted to stay home on the 4th of July and goof around the ranch. So much for that idea. After some serious debating on whether or not I wanted to brave the traffic in town I decided that since the massive new highway bypass was to be completed by the same time next year that it was a good idea to record the fireworks one more time without the traffic noise the highway will bring. This time I was going to record at the highest resolution I could and bring all the gear I could carry on the long walk down to the city beach.

Background check…
Sandpoint Idaho has a small town fireworks show every year and the last time I recorded it was 2004. I used a HHB DAT machine and recorded at 16 Bit 44.1K with a AT-825 Stereo Microphone. I got some great recordings that night and still use the sounds every now and then. Earlier in the day I drove in to City Beach in Sandpoint with my wife and we walked around for a while and took some photos. During our walk we met up with the local Lions Club which is the group that funds and presents the fireworks show every year. They were having a raffle and I bought a few tickets to try and win a Off Road 4 wheeler. I asked if I could get out on the sandbar to record the show and the man remembered me from 2004. He told me that as long as the guys shooting off the fireworks were OK with it, they were OK with it. So, I was in! I drove home totally amped and gathered the gear I wanted to use and waited until 2 hours before the show and then drove in to town.

A dream come true…
Since one of my MKH-8040 microphones was being repaired I used just one and a Sanken CSS-5. I thought I could get some good sound effects with this setup so I rigged up both microphones on a stand. I could only record from one location since the area was so small and tight that multiple perspectives was a no go. There was also the issue of the sparks and other flaming debris that would fall and I wanted to be able to quickly run in and grab my gear if I had to. I thought of using one more microphone at a distance but I was already at capacity for what I could carry down there.

I recorded the fireworks at 24-Bit 192K with the microphones in full windshields and windjammers to 2 Sound Devices DS-702 recorders sync locked together. I placed the microphones about 6 meters away from the finale launch tubes. I pointed the MKH-8040 right at the launch tubes and angled the CSS-5 up in the air about 45 degrees. I figured the MKH-8040 would get me some serious low end launches and the CSS-5 was in stereo mode to get some good stereo echoes and explosions.

When I first arrived around 9 pm the wind was light so I thought I could record without the Windjammers. I was so wrong. As the sun set the wind really kicked up and I did not want to take a chance at wind ruining the recordings. The MKH-8040 is very sensitive and the slightest wind gust will make it thump and I did not want to use the low cut filter on the SD-702. I wanted to get all the low end I could out of the mortar launches.

They fired of two 5 minute warning shots and I was able to get some levels. After the first 5 minute warning shot I noticed I was recording too hot. It still sounded great but I knew once the show was going full blast that the levels would have clipped. The 2nd warning shot showed I was still to hot so I engaged the pad on the SD-702 and hoped for the best. In the end, only a few booms really made the limiter kick in. I like the limiter in the SD-702 and was happy with the results.

If you look close at the end of the video you can see the mics on the left side near the finale tubes. A big burning chunk of fireworks ash landed right under the microphones and only small burns in the MKH-8040 Rycote Windjammer. I guess I was lucky.

It was over way too soon…
I had a great time and the fireworks guys were really cool about me recording the show. I have a lot of respect for what they do. It’s very dangerous and they hand light all the fuses, a tough, smokey job. A special thanks to them and I hope to see them next year and buy them a drink or two. At one point as I was waiting for the show to start the city police on bikes came up and asked me permission to come in and hang out. Oh yeah, I was part of the crew now!

VIDEO OF SET UP AND MOST OF THE SHOW (iPhone Audio)

SOUNDS FROM THE SHOW

The first part of the audio clip has the two warning shots to get the crowd ready and the rest is from the begining of the 17 minute show. The clip is also a composite of both mics. Enjoy the sounds. 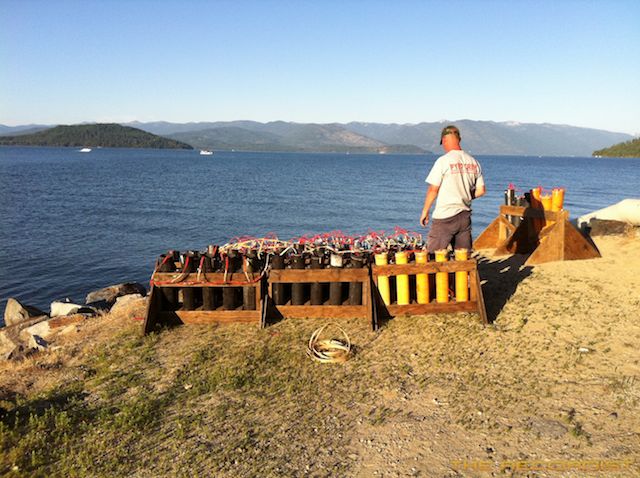 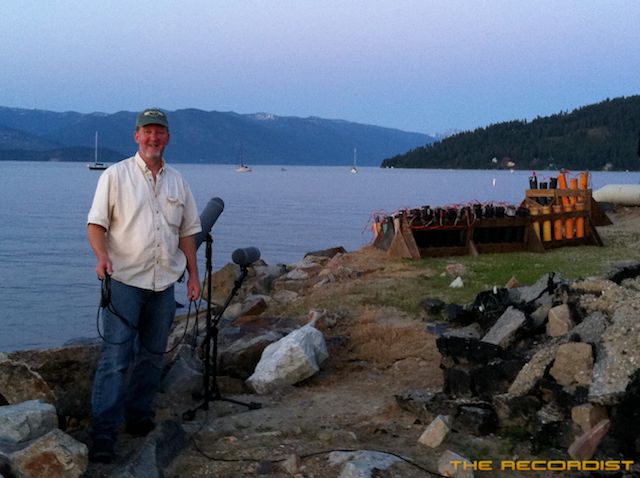 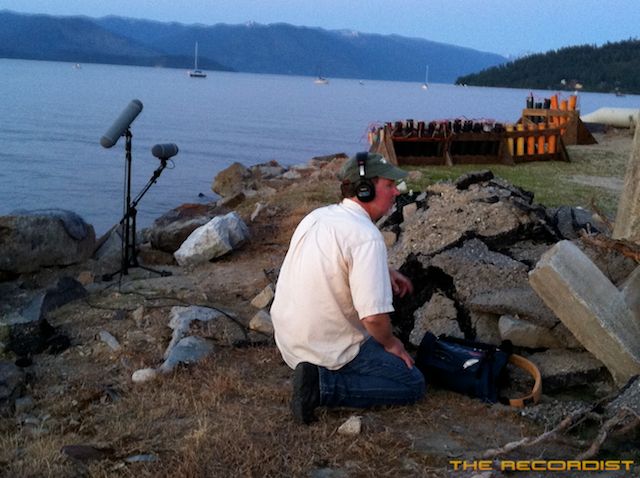 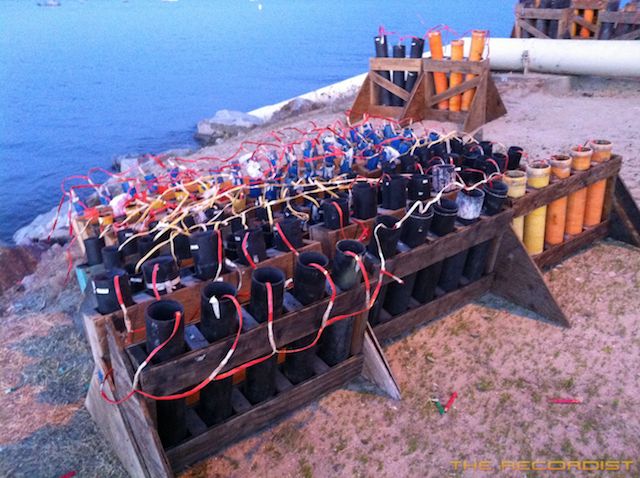 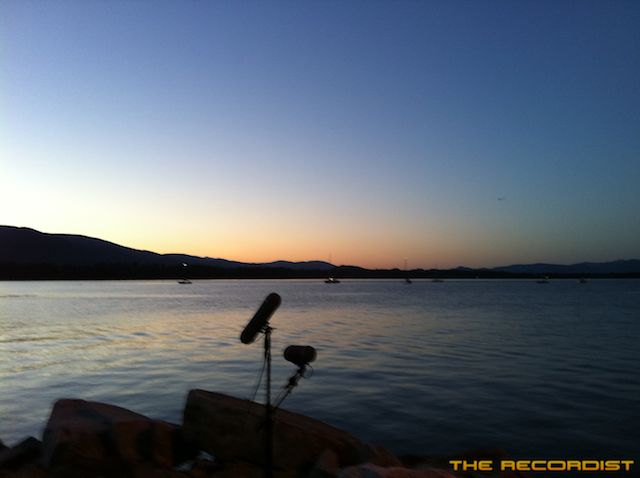 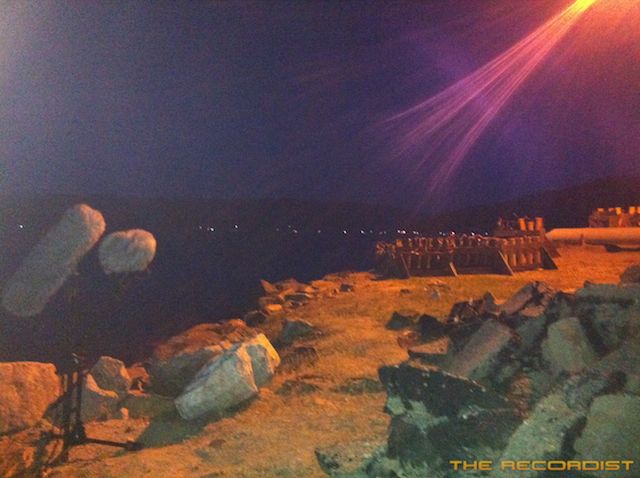 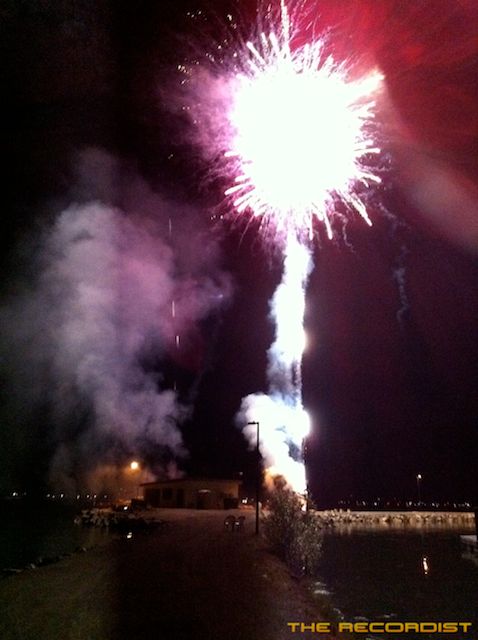