You are here: Home1 / Blog2 / Featured Articles3 / A Tale of Two Hueys 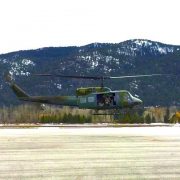 You can probably tell I love recording helicopters. I can hear them coming from miles away as I sit in my studio working on stuff I should be working on. If I hear them more than once in a half hour period I know something is up and they will be around for a while. This happened on March 17, 2017. A couple of Huey helicopters flew over my house and were flying around the area so I hustled to the local airport and there they were, ripe for the picking!

After I arrived I spoke with one of the crew members from the 36th Rescue Squadron (36th RQS) at Fairchild AFB Washington. He was left behind while the others were out flying around and he informed me they were conducting “over water” search and rescue training on the lake. They would be flying in and out all day. As soon as I heard him get the call they were on their way back I prepped the SoundField ST450 MKII Ambisonic Microphone for recording. The SoundField ST450 MKII has internal heaters and they can take a few minutes to warm the capsules so the humidity doesn’t effect them. Once I had the microphone on a boom pole I was ready to step outside onto the cold, windy runway. 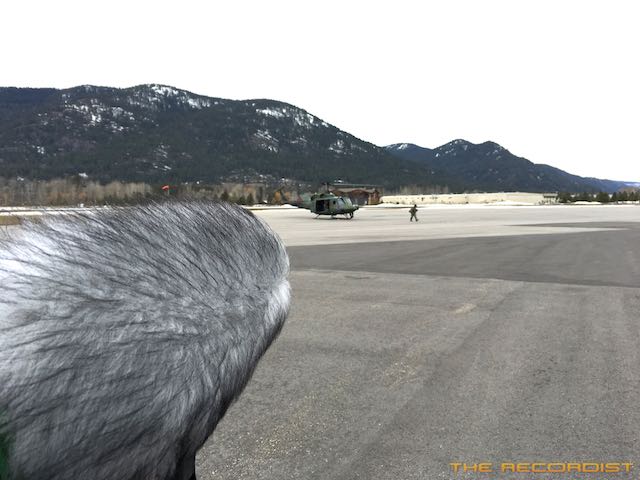 Only one Huey flew in to swap crew members and then it was off to the lake. A short time later they both flew in and landed for a lunch break. I patiently waited for the Huey crews to return so I could record them starting up.

It takes them quite a while to prepare and safety check the helicopters for departure so I had plenty of time to set up the SoundField ST450 and have my Schoeps MK4/MK8 MS rig on the boom pole. I placed the SoundField ST450 approximately 150 feet in front of the helicopters. My goal was to get a nice balanced Ambisonic recording so I used a microphone stand and the SoundField ST450 was centered between Hueys. I had the Schoeps MK4/MK8 MS microphone in my left hand using a boom pole and in my right hand was my iPhone to record the video. It was so cold my iPhone ran out of power and shut down right after the helicopters started their departure from the middle of the runway. I guess iPhones don’t like the cold that much. 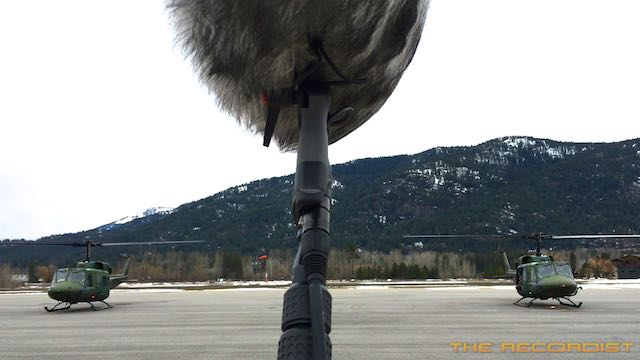 Here is the stereo version for your enjoyment via Soundcloud. It’s a 16-Bit 48kHz WAV file that you can download. Feel free to use it in your projects, give credit if used please! The sound file is not for resale stand alone! All copyright laws apply.

Below is the link to the raw Ambisonic and Schoeps Raw MS files. Have fun playing around with the Ambisonic file using the SurroundZone plug-in or your software of choice. It’s crazy cool how you can zoom closer to the helicopters and then pull back and move side to side. The great thing about Ambisonic recordings is the flexibility after recording.

This work is made and given to you under license. By accepting this work, you agree to the following terms and conditions. Your use of this work is limited and restricted solely for the purpose of synchronizing recordings there from in timed relation with films, training or marketing presentations, radio and television presentations or commercials, and any other multimedia, audiovisual or computer generated displays, programs or presentations. Neither you nor anyone else may make any copies of any of the recordings on this work, except as may be designated to a single stand alone workstation for the purpose of specific audio and/or visual synchronization at your own facility. Transfer, copying, selling or duplication of the work in whole or in part for any other purpose is expressly prohibited unless specifically authorized in writing by The Recordist. *** Transfer of one or more sounds to any format allowing network or remote access by two or more end users requires a multi-user License. Contact The Recordist for details. In the event of a breach of these terms, action may be taken against you directly by the owner of the copyright. 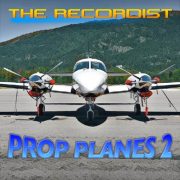 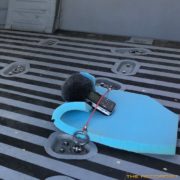 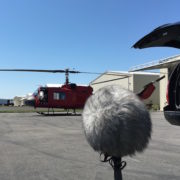 The Fluid Nature of Recording Aircraft 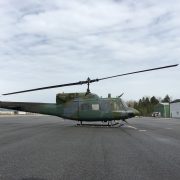 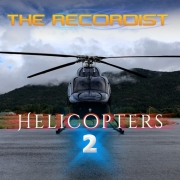 Helicopters 2 is Ready to Fly 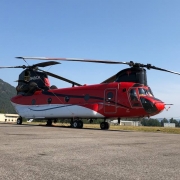 The Sound of a UH-1N Helicopter
Scroll to top