Snort… Snot… danger signal… Call it what you want 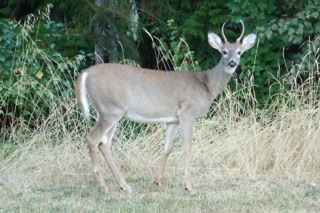 One of the sounds a deer makes when it senses danger is snorting. I have been trying to get a decent recording of this nose blow for years. Sometimes when I’m out recording in the yard I will startle one of them out in the forest and they blow snot out their nose. Sometimes it’s very loud and startles me. If there are a few of them hanging out in the woods they all go running when the boss of the group makes this sound. I have heard them do this 10 yards away from me and 50 yards away from me. Believe me when I tell you that at 10 yards it’s quite loud and makes me jump.

I recorded this set of snorts while I was getting some dry grass sounds for my next library called Ultimate Foliage. The tall grass was at the edge of the property at the forest tree line and I had no idea the deer were around. I usually hear them walking around in the brush especially this time of year when the ground is so dry. They can make quite a racket out there.

The deer recording is not the cleanest but it’s the best I’ve recorded so far. There were some cars driving by and I was waiting for those cars to pass when one of the the deer decided to let it’s snot fly. I turned and aimed the MKH-416 in his direction and tried not to move. The deer were probably about 30 yards away from me deep in the woods and after the last snort they all ran off like I was a hunter. It will be hunting season around here soon and every year they disappear for a while and go into hiding. Disclaimer: I do not hunt and have no opinion on the subject except that once I was tricked into eating venison and after I was told what it was, I freaked.

Sometimes when I’m out recording on the ranch the squirrels decide to yap it up and I swear they are messing with me. It can be so very quiet outside and I grab the gear, start recording and they want have a party in the trees. One starts, then another, then another and before you know it I’m recording squeaking and chirping instead of the intended sound. This summer I decided if I can’t beat them, join them. Sometimes they actually make a cool sound when they are playful and at other times they can chirp until it gives me a headache.

The squirrels here in the country are smaller and more afraid of humans than the bigger ones in the city and suburbs. I have only been able to get close to one a few times in all the years I’ve lived here.

These recordings are from two separate occasions. The first one was a squirrel chasing another and the second part was from a very close encounter with one on my barn roof. I was able to get two meters away from the little guy as he chirped his brains out. At the end of the track I pitched the track down an octave and it sounded like a strange furry creature in the evil forest of some horror movie.

The Adventure of a Leaftime
Scroll to top